Thomas Brown Holmes [T.B.H.] Stenhouse, a British convert and one time missionary companion to Lorenzo Snow, was the first Mission President over the Swiss Mission.1 While serving as Mission President, he edited a pro Latter-Day Saint periodical entitled Le Reflecteur [The Reflector], and published a book entitled Les Mormons Et Leurs Ennemis [The Mormons and Their Enemies],2 which was written for the purpose of defending the faith and exposing popular anti-Mormon arguments that were promulgated at that time. Despite these accomplishments, Stenhouse later became disaffected and apostatized from the church, and with his wife Fanny, joined the Godbeite movement.3 In 1873 he published an expose against the church, presumptuously entitled, The Rocky Mountain Saints: A Full and Complete History of the Mormons.4  Within the book he devotes a chapter to the Book of Abraham, borrowing freely from Jules Remy's publication, wherein, Joseph Smith's explanations of the figures in Facsimiles 1-3 are juxtaposed with M. Theodule Deveria's transation of the same.5  This was done for the purpose of trying to prove that Joseph Smith could not translate Egyptian. The comparison is prefaced by a brief history of the mummies and papyri in church history.


Stenhouse's publication has become a standard for anti-Mormons who wish to attack Joseph Smith's ability to translate. His publication has frequently been employed by Joseph's critics over the past 130+ years, although the translation comparison never receives attention past the surface level differences. A response to Stenhouse's publication, which had a much broader dissemination than Remy's book, was provided by Elder George Reynolds, a Seventy in the Church of Jesus Christ of Latter-Day Saints. Reynolds was the first person to attempt to understand the meaning of the Egyptian explanations for the purpose of identifying similarities between Egyptian beliefs and Joseph Smith's explanations of the Facsimiles. Reynolds also discusses other historical issues in connection with the Book of Abraham, offering a scholarly approach to defending the authenticity of that book of scripture. His response was published serially in the Latter-Day Saints' Millennial Star, beginning in 1879, and also published that same year in booklet form, in Salt Lake City, Utah. In this sense, Reynolds was the first apologist for The Book of Abraham. 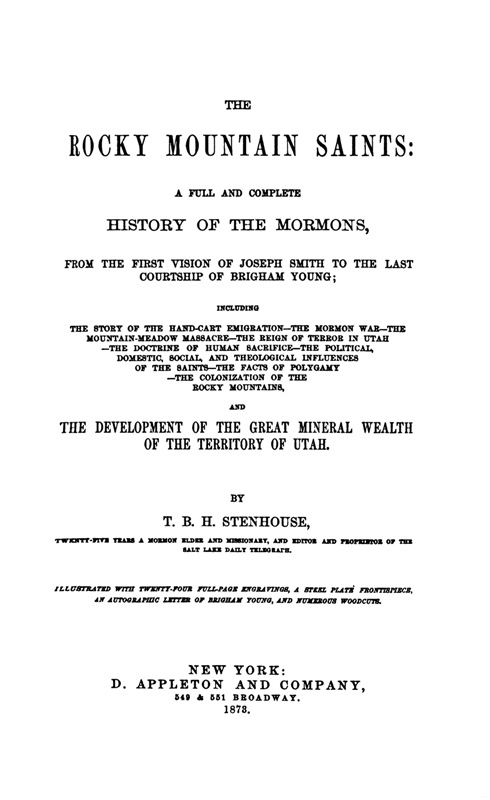 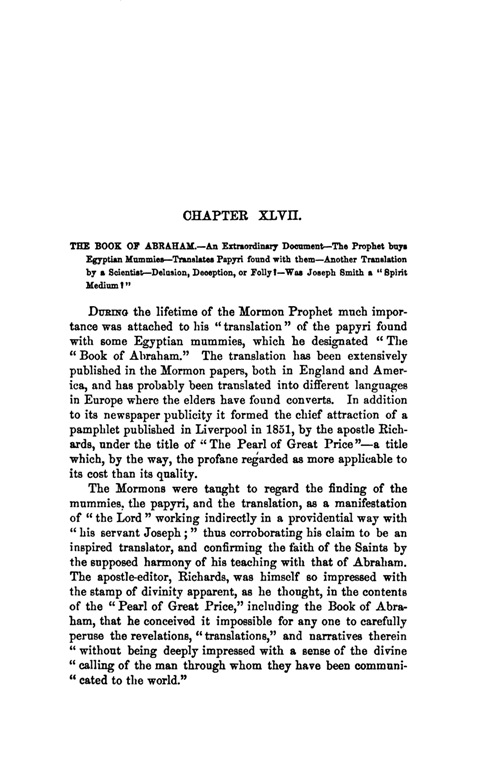 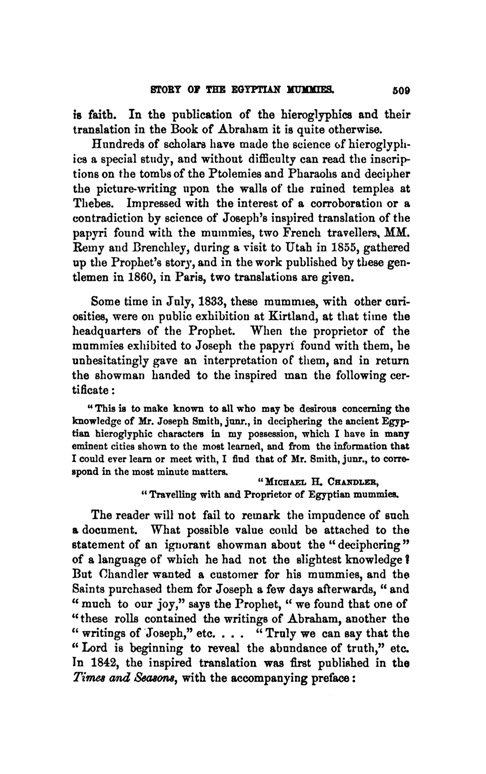 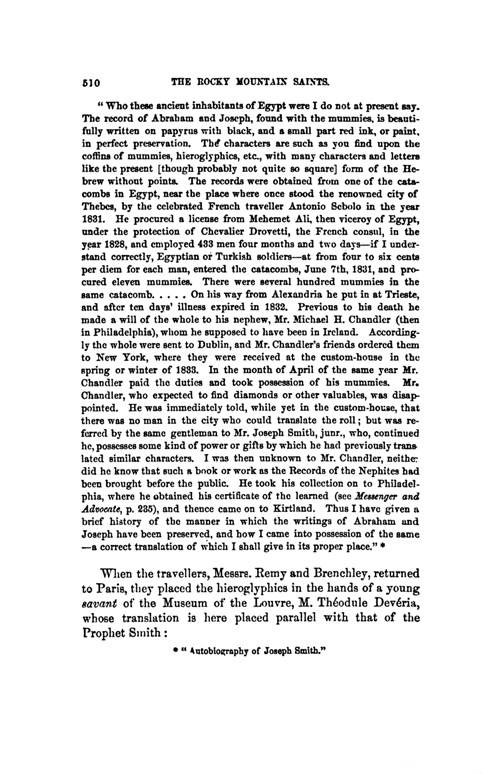 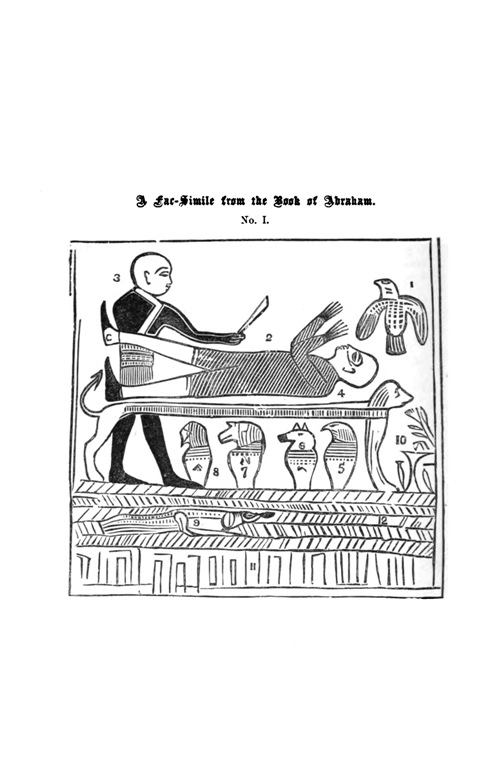 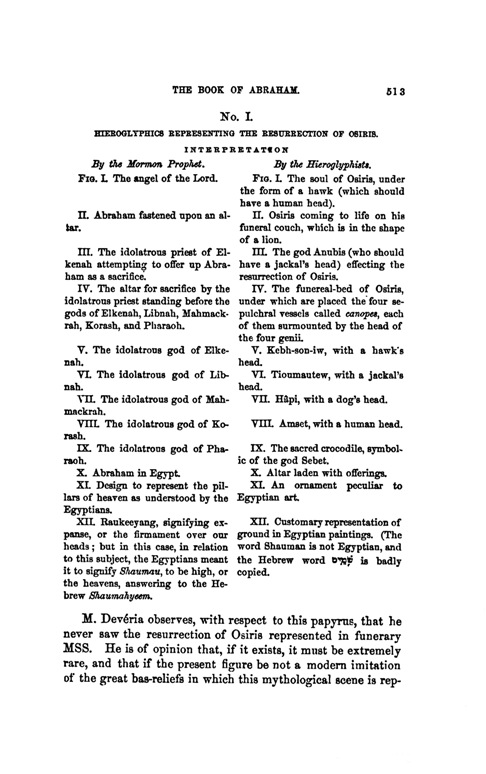 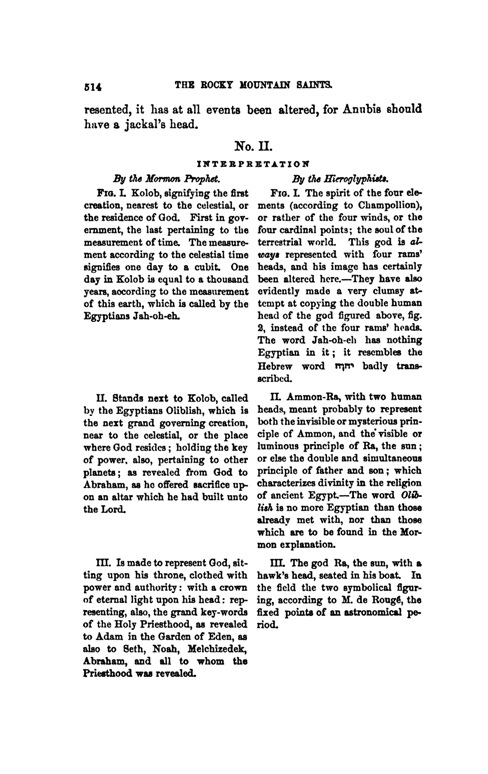 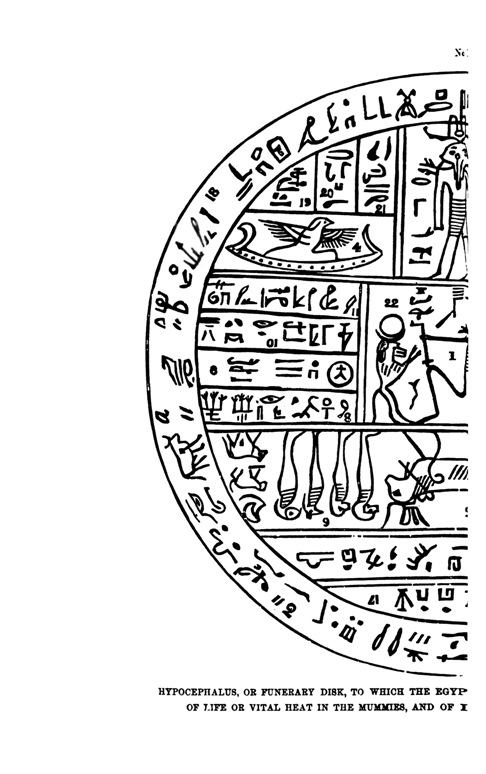 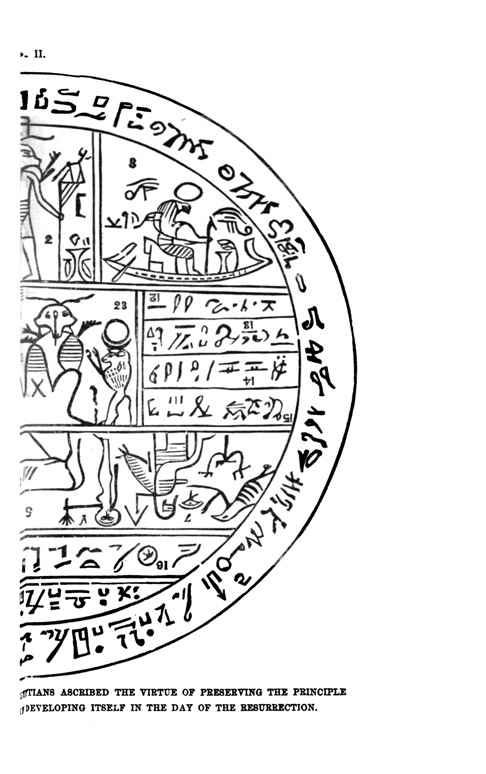 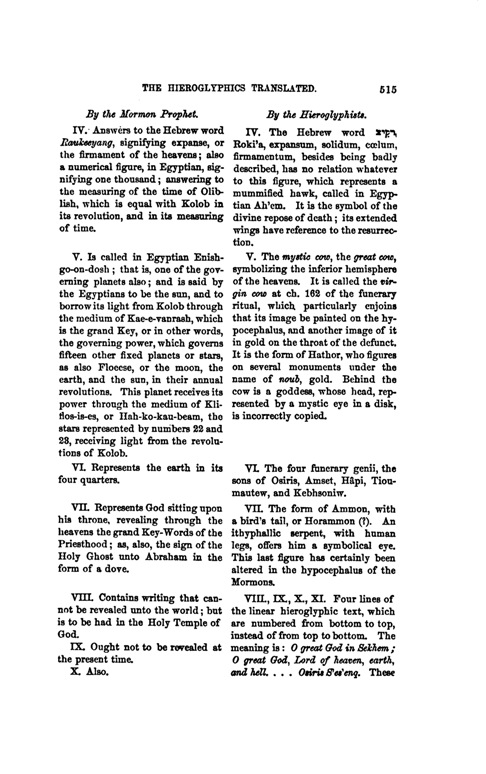 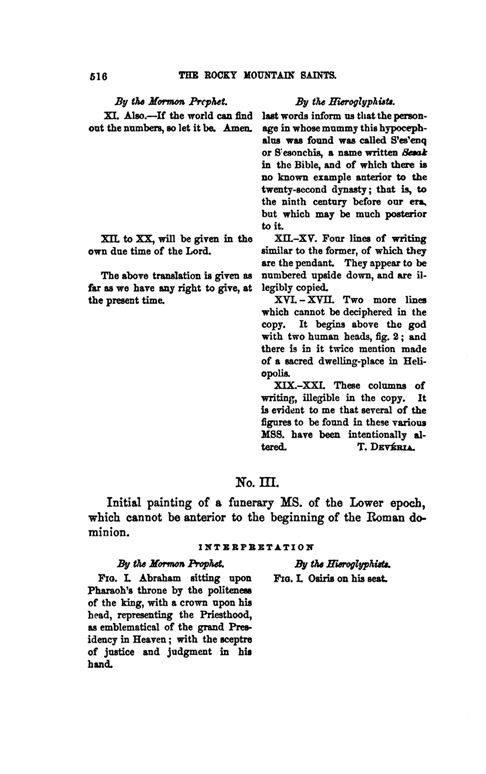 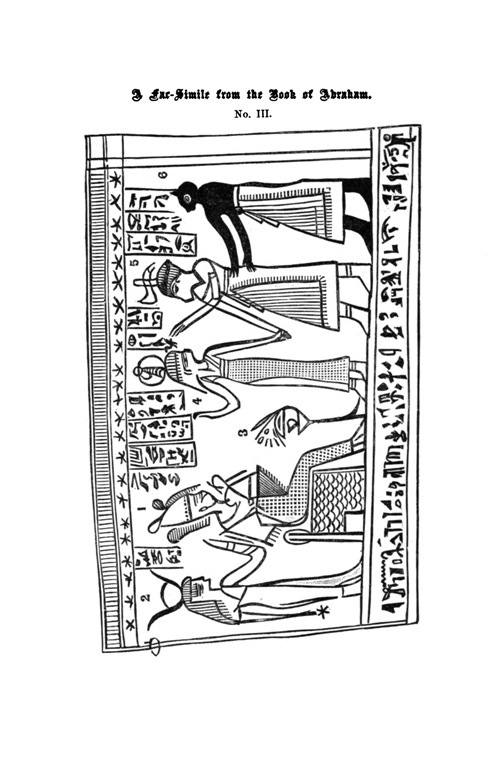 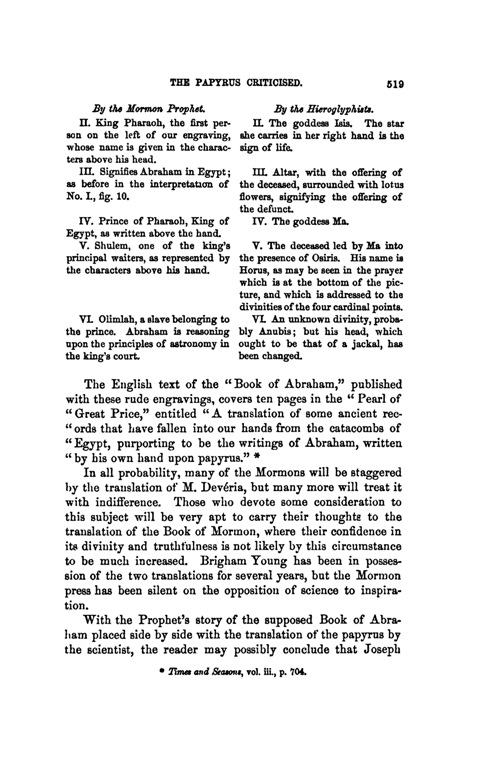 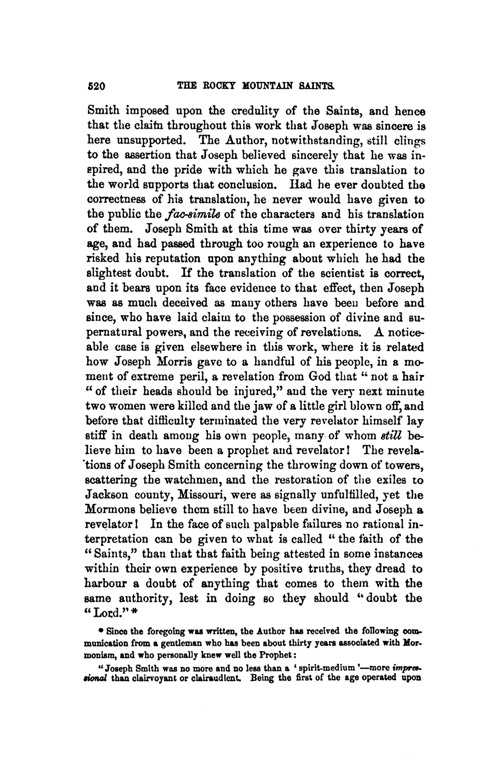 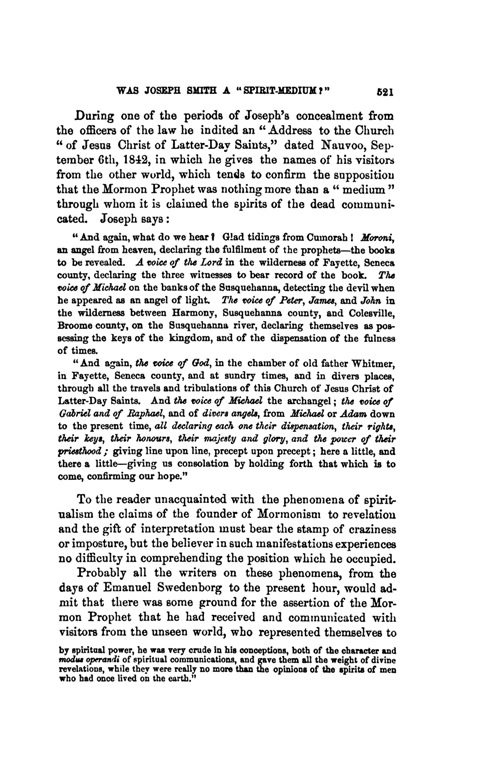 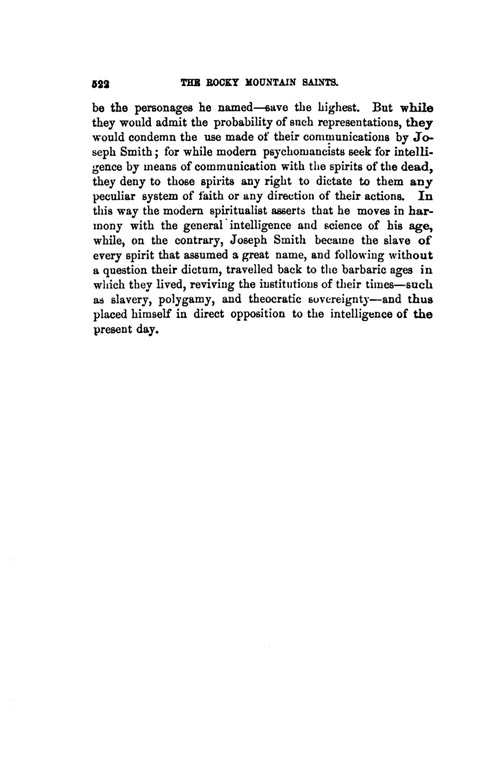 1 Andrew Jenson, Church Chronology (Salt Lake City, UT: Deseret News, 1899), 41
2 T.B.H. Stenhouse, Les Mormons Et Leurs Ennemis [The Mormons and Their Enemies] (Lausanne, Switzerland: Impremiere Larpin Et Coendoz, 1854)
3 Ronald W. Walker, "The Stenhouses and the Making of a Mormon Image," Journal of Mormon History, 1 (1974):51
4 T.B.H. Stenhouse, The Rocky Mountain Saints: A Full and Complete History of the Mormons (New York: D. Appleton and Company, 1873)
5 Whether Stenhouse first became aware of Remy's French edition or English edition of his book is uncertain; however, Stenhouse was fluent in French (his previously mentioned book was published in French), and either edition would have sufficed for his purposes. Deveria was a French Egyptologist who worked at the Louvre Museum in Paris, France.
Posted by Tim at Wednesday, January 05, 2011