In Edward Tullidge's periodical, Tullidge's Quarterly Magazine, he provided a History of Provo (Volume 3, beginning on page 233) that included biographies of many prominent settlers and leaders. One of those prominent Provo residents in the medical profession was Dr. John Riggs. Dr. Riggs' father owned the only hotel in Kirtland, Ohio, when Oliver Cowdery, Parley P. Pratt, Peter Whitmer, Jr., and Ziba Peterson passed through while on their mission to proselytize the Lamanites.  According to Riggs, his father put up Michael Chandler at the hotel when he visited Kirtland with the mummies and papyrus in 1835. Interestingly, according to Dr. Riggs, Michael Chandler had with him a translation of some of the text on the papyri that he obtained from Dr. Charles Anthon (the well-known linguist that Martin Harris had visited with seven years previously in regards to the translation of the Book of Mormon). When the Prophet was invited to translate the papyri by Chandler, Dr. Riggs, who was present when the Prophet presented his translation, noted that the "translation of the Prophet and the professor [Anthon] agreed so far, but "there was one language Professor Anthon could not translate which the Prophet did."" This implies that multiple texts were on the papyri written in at least two different languages.

The Mormon Doctrine of Deity: The Roberts-Van Der Donckt Discussion was a book published by the Deseret News in 1903. The first three chapters comprise a discussion between BH Roberts and the Reverend C. Van Der Donckt, a priest in the Roman Catholic Church from Pocatello, Idaho. After this discussion, Elder Roberts included excerpts from scriptures regarding Deity, including extracts from the Book of Abraham. 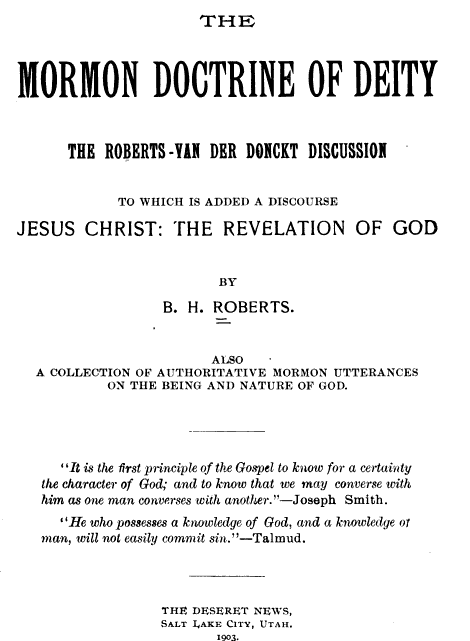 In August 1878, Orson Pratt delivered a discourse regarding revelation.  In his discourse he recounted some of the revelations and scriptures given by the Lord through the Prophet Joseph Smith and in connection with this, Elder Pratt briefly discussed the history of the Book of Abraham as it was understood at that time. He also mentioned that through revelation Joseph Smith could translate by aid of the Urim and Thummim. The portion of his discourse regarding the Book of Abraham is found in Journal of Discourses, 20:64-65.

The following notice by Parley P. Pratt, Apostle and Editor of the Millennial Star, in Volume 3, Issue 2 (June 1842), page 32 of the MS, was given to notify the Saints that extracts from The Book of Abraham would be published beginning in the following month's issue - online here.