Memoirs Of A Mormon, written by Louis Alphonse Bertrand, was published in Paris, France, in 1862. Bertrand was a convert of John Taylor's, and assisted the future prophet in translating the Book of Mormon into French. Additionally, he was involved with the church periodical L'Etoile du Deseret [The Star of Deseret] while serving as a Mission President over France. For biographical information on Brother Betrand,1 visit here and here.

Within Bertrand's book, he discusses the two volume publication of Jules Remy's, Voyage Au Pays Des Mormons (translated into English and published in two volumes as A Journey to Great Salt Lake City), which included a translation of the Book of Abraham facsimiles, and marked the first published scholarly criticism against Joseph Smith's explanations provided for the figures in the facsimiles.  Bertrand's response to Remy and Deveria is provided below (including translation from French into English).

My thanks to Michael W. Homer for directing me to this reference, and to Griffin Cammack for providing some assistance in translating the text. 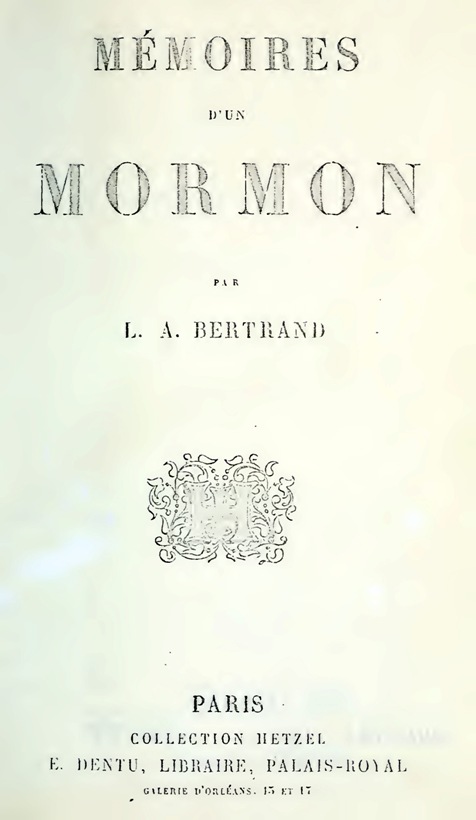 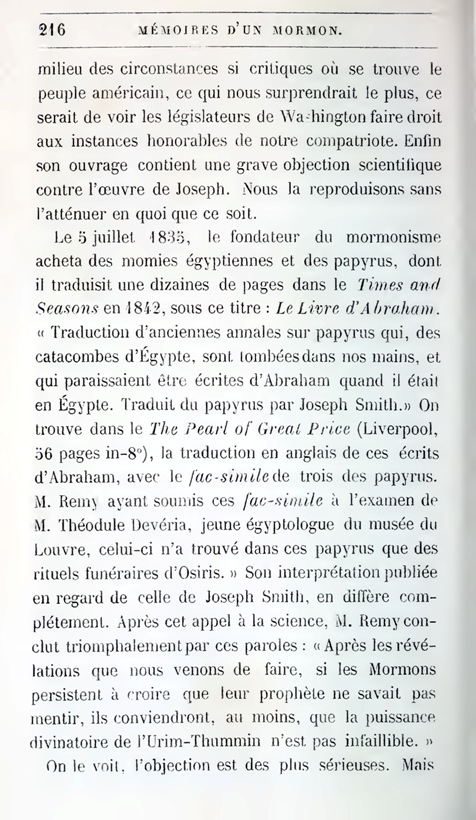 Beginning with the first full sentence in the top paragraph:


Finally the book contains serious scientific objection against the work of Joseph.  We reproduce it without being mitigated by anything.

On July 5, 1835, the founder of Mormonism bought Egyptian mummies and papyrus, which he translated a dozen pages in the Times and Seasons in 1842 under the title: The Book of Abraham. "Translation of ancient records written on papyrus, from the catacombs of Egypt, have fallen into our hands, and which appeared to be written by Abraham when he was in Egypt.  Joseph Smith translated the papyrus.  We find in The Pearl of Great Price (Liverpool, 56 pages 8vo), the English translation of the writings of Abraham, with three facsimiles of the papyrus.  Mr. Remy has submitted these facsimiles for examination to Mr. Theodule Deveria, a young Egyptologist from the Louvre Museum, who found that these papyrus contained the funerary rituals of Osiris."  His published interpretation with respect to that of Joseph Smith, differs completely.  After this appeal to science, Remy concludes triumphantly with these words: "After the revelations that we have done, if the Mormons continue to believe that their prophet did not know how to lie, they agree, at least, that the divining power of the Urim-Thummim is not infallible."

We see that the objection is more serious.  But 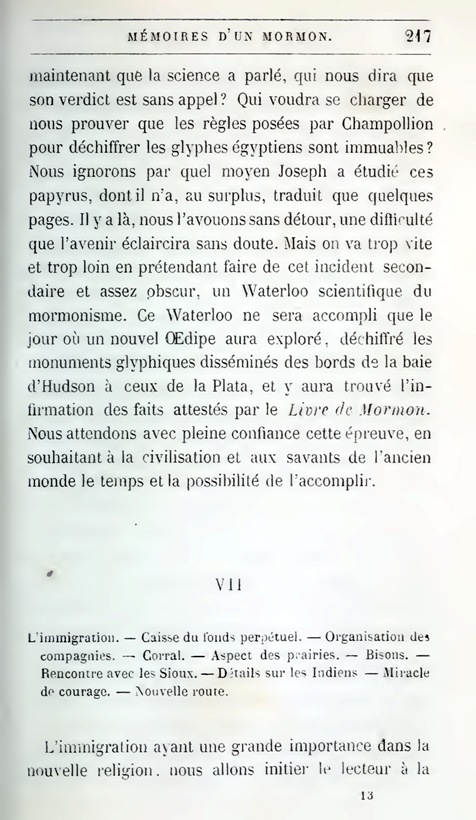 now that science has spoken, who will tell us that his verdict is final?  Who will undertake to prove to us that the rules laid down by Champollion to decipher Egyptian glyphs are immutable?  We do not know by what means Joseph has studied these papyri, which he has, moreover, translated a few pages.  There is, we confess frankly, a difficulty that the future will clarify without doubt.  But it goes too fast and too far in claiming to this incident secondary and rather obscure, a Waterloo Scientific Mormonism.  This Waterloo will be accomplished when a new Oedipus has explored, and deciphered the glyphic monuments scattered on the banks of the Hudson Bay to those of La Plata, and finding the invalidation of the facts attested by the Book of Mormon.  We expect this test with full confidence, hoping to civilization and to scholars of the ancient world the time and opportunity to do it.