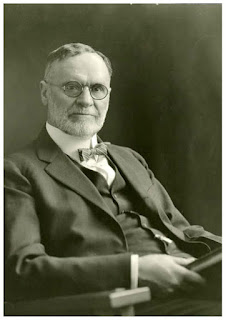 "A similar question was once put to a righteous man named Job, whom God answered "out of the whirlwind," saying: "Where wast thou when I laid the foundations of the earth? declare if thou hast understanding * * * When the morning stars sang together and all the sons of God shouted for joy?" (Job 38:1-7.)

Job does not seem to have answered the question. Perhaps he did not have sufficient "understanding," and, unlike the "illuminated class" mentioned, would not assume to know what he did not know. But another righteous man named Abraham, who lived four centuries before the time of Job, had virtually answered that question; and his answer slept for two thousand years in the wrappings of a mummy in the catacombs of Egypt, awaiting the hour when Joseph Smith would give to the world his translation of the Book of Abraham. Therein the Father of the Faithful says:

"Now the Lord had shown unto me, Abraham, the intelligences that were organized before the world was; and among all these there were many of the noble and great ones;

"And there stood one among them that was like unto God, and he said unto those who were with him: We will go down, for there is space there, and we will take of these materials, and we will make an earth whereon these may dwell;

"And we will prove them herewith, to see if they will do all things whatsoever the Lord their God shall command them;

How majestic! How sublime! And how wonderfully comprehensive! Surely the Book of Abraham bears testimony to its own divine origin. The sublimity of its doctrines and the spirit accompanying them are proof positive that they came right down from heaven.


I bear in mind a conversation that I had with the late Bishop Franklin S. Spalding, of the Episcopal Church, whose untimely accidental death some years ago we all deeply deplored. He had attacked the Book of Abraham in a published commentary, and was answered by a number of our brethren through the press. Soon afterwards I met the Bishop, with whom I was quite well acquainted, and he said to me: "Why have you not answered me?" "I have," was my reply; "I have been answering you all over the country, but it hasn't gotten into the papers." "Oh, indeed, and what have you been saying?" he inquired. "I have been saying this:

"'Truth is truth, where'er 'tis found,
On Christian or on heathen ground.'

"And whether it be taken from an ancient hill in North America, as was the Book of Mormon; or from the catacombs of Egypt, as was the Book of Abraham, if it's true, it's true, no matter who translated it, or how many supposed flaws appear in the translation. The character of the content and the spirit that goes along with it, determines better, than all else its truth, its authenticity. We know Shakespeare's writings by the very sound of them—they have the Shakespearean ring. Literary experts can tell the difference between those writings and all others. We recognize Milton's poetry by the Miltonic ring; the poetry of Byron and Tennyson by the Byronic or Tennysonian ring. Then, if God speaks, why should it not have a Godlike ring, something that no man can counterfeit, nor any but a spiritual expert fully appreciate?"

Bishop Spalding agreed with me. Not as to the Book of Abraham, but as to the best way of testing any book. "I am one with you," he said, "in the belief that the highest evidence of the truth of any work is the spirit that it breathes and the wisdom that it inculcates." "Then," said I, "this Book of Abraham needs no defense from me, nor from anyone else. It speaks for itself; it defends itself. By the majesty of its language, by the sublimity of its teachings and by the Spirit that permeates them, it proclaims itself divine."

Back now to the Book of Abraham: "And then the Lord said, Let us go down. And they went down at the beginning, and they, that is the Gods, organized and formed the heavens and the earth." The creation was two-fold, firstly, spiritual; secondly, temporal.

All divine creations have a spirit, even the trees and the flowers. In other words, they are souls, spirit and body combined. A learned man who was a chemist set himself to the task of making a grain of wheat, in imitation of one produced by the God of nature. Taking such a grain, he separated it into its component parts, finding that there was so much lime, so much silica, so much of this element and that, in its composition. Then, taking just such proportions of each element, he brought them together by his chemical skill and created a grain of wheat, so exactly similar to the natural grain, that the eye could not detect the difference. But there was a difference—a vast difference. He planted the two grains, and the one that God made sprang up, while the one that man made stayed down. God's wheat grain had a spirit; the other had none.

"There is a spirit in man, and the inspiration of the Almighty giveth it understanding.'' There is a spirit in all of our Father's creations. They were made "for a wise and glorious purpose," and will be perpetuated in the great hereafter. The poet Byron, in a cynical epitaph on the monument of his favorite dog, wrote: "Denied in heaven the soul he held on earth." But "Mormonism"' teaches no such doctrine. Joseph Smith declared that not only the human race, but the lower orders of the animal creation were designed for eternal felicity. And John the Revelator teaches the same doctrine in the sublime symbolism of the Apocalypse.

This earth was created, not out of nothing, as antiquated theology asserts; but out of eternal spirit and eternal element; and it is but one of millions like it that have been created, peopled and redeemed by the same All-wise God, who has placed his children here, primarily to give their spirits bodies, that they might become souls, capable of endless increase and advancement; also that it might be seen whether they would do all that the Lord requires at their hands.

We are here for education and development, through joy and sorrow, through smiles and tears, through pleasure and pain, bitter and sweet, light and darkness, enduring the vicissitudes and contrasts of mortal life, that we may become wise and gain a glorious experience. And if we now walk by faith, as we once walked by sight, and keep this second estate as we kept the first, or spirit estate (and were "added upon" for so doing), we shall reap the promised reward and "have glory added upon our heads forever and ever.''