Iconotropy and the JS Abraham Facsimiles

This post was originally written and published online by Bill Hamblin at Mormon Scripture Explorations on April 7, 2013, and is reproduced here without alteration (except for slight formatting changes), courtesy of Professor Hamblin - my sincere appreciation.


Iconotropy is an English neologism from Greek, meaning literally “image turning.”  It is defined as “the accidental or deliberate misinterpretation by one culture of the images or myths of another one, especially so as to bring them into accord with those of the first culture.”   Iconotropy is, in fact, the most common ways cultures deal with images from foreign or ancient cultures.  That is to say, we almost always misunderstand and/or transform, at least to some degree, the iconography of other cultures or religions.  The further distanced we are from another culture in time, religion, ideology, or space, the more likely we are to misunderstand their iconography.

There are numerous examples of iconotropy in human history.  The most well-known is the Nazi swastika, which originally was an Indo-European good-luck symbol, possibly representing the sun, and can be found in most cultures throughout the world.  The Nazis iconotropically adopted this symbol for their Nazi ideology, and it is thus understood by most Westerners today.   But among Buddhists, the swastika is an auspicious religious symbol, often associated with images or temples of the Buddha (Below: Buddha with swastika on its chest.)

Another example is the Crux Ansata (“cross with a handle”), or Ankh.  In ancient Egypt, the ankh (☥ ʾnḫ) symbol represented life, and is ubiquitous in Egyptian iconography.  (Below: A god gives the pharaoh ankh/life.)

As the country was Christianized, however, the ankh/life symbol became linked to the life-giving death of Christ on the cross, and became formally reinterpreted by Christians as a symbol of the Christian cross and eternal life.  (Below: Coptic fabric with Christian ankh/cross.) 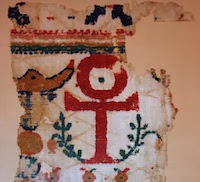 Which leads to a question: which is the Egyptian meaning of the ankh?  They are, in fact, both equally Egyptian, even though the crux ansata is an iconotropic reinterpretation of the ancient Egyptian ankh.


An interesting literary example of iconotropy can be found in Robert Graves’ novel King Jesus, where Jesus and a Canaanite priestess undergo a type of a contest offering opposing interpretations of a sequence of ritual panels (ch. 19, p. 249-259).

When examining the Book of Abraham facsimiles, we need to realize that all scholars, both Mormon and non-Mormon, agree that Joseph Smith’s interpretations of the facsimiles are iconotropic–that is to say they are reinterpretations of ancient Egyptian symbols transformed into a new cultural-religious context.  The point where the critics and believers disagree is the cultural context in which the iconotropy occurs.  Is it an ancient, Abrahamic/Jewish iconotropic reinterpretation of Egyptian symbolism?  Or is it purely early nineteenth century American iconotropy invented by Joseph Smith?


In this regard, it is important to remember that the ancient Egyptians themselves, engaged in iconotropic reinterpretations of their own symbols in different Egyptian denominations and times.  As Jan Assman notes, “the temple reliefs of the Late period [Egypt, after c. 700 BCE] reflect a full-fledged tradition of ritual exegesis, a culture of interpretation … applied not to texts–as in the more-or-less contemporaneous Alexandrian and Jewish institutions of interpretation–but to pictures.  However, this culture of interpretation [of Egyptian iconography] is anything but a symptom of Hellenistic influence; on the contrary, it is deeply rooted in Egyptian cult.” (Jan Assmann, “Semiosis and Interpretation in Ancient Egyptian Ritual” in Interpretation in Religion, ed. Shlomo Biderman and Ben-Ami Scharfstein (Brill, 1992), p. 92.)
In other words, by the Late Period at the latest, the Egyptians had developed religious methods of reinterpreting their own ancient iconographic symbols and images (which were by this time already 2000 years old).  Different movements and sects within Egypt produced differing interpretations of the same images.  This phenomenon broadly parallels similar and roughly contemporaneous developments of different movements of textual exegesis and interpretation among both Egyptians, Alexandrian Greeks, and Jews within Egypt itself.  The question for scholars of the Book of Abraham is: does Joseph Smith’s interpretations of the iconography of the papyri represent nineteenth century iconotropy, or a revelation to Joseph of ancient iconotropy?
Posted by Tim at Wednesday, November 27, 2013